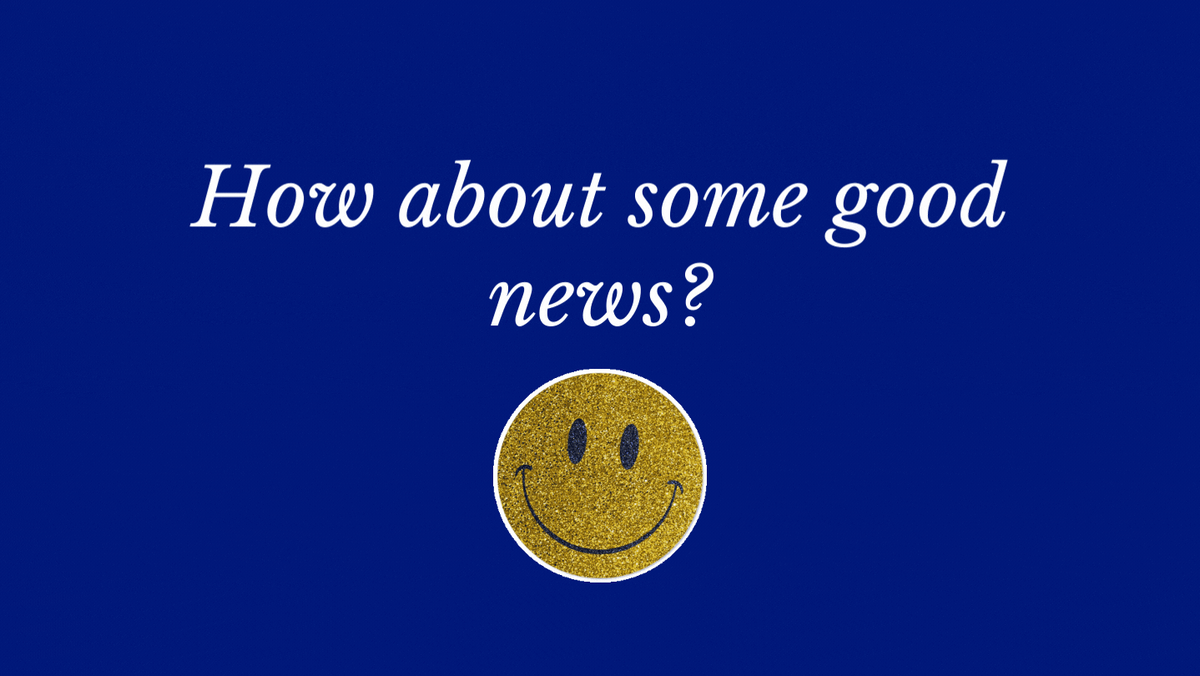 How about some Good News?

Since the beginning of 2022, it feels as if there hasn’t been much good news.  Financial markets have been down, a war broke-out in Ukraine, and I officially became old when I turned 40 in mid-February!  At the end of the day, as I try to instill in myself and others, negativity gets you nowhere.  So, if you’re looking for some good news (we all could use some), then you’ve come to the right place!

Are you ready for the good news now? First, let's talk about the latest geopolitical events occurring in Ukraine. Don’t go anywhere, the good news is coming, I promise. The invasion of Ukraine has caused shockwaves around the world. It’s left many of us wondering what will happen next which has caused an understandable amount of concern and panic.

When people panic, their thoughts often go to several places - mainly their families and their finances. When it comes to our families, we want to know that they’ll be safe. When it comes to our finances, we tend to get emotional, which is why we believe behavioral coaching is equally as important to investing and planning when creating long-term sustainable wealth. When we see red numbers on CNBC and hear about share price drops, we want to hoard our cash in the ‘safest’ place we can think of.  In fact, did you know that psychologically the color red induces a sense of anger, danger, and warning[1]?

War, what is it good for?

War, even if the US isn’t directly involved, can create a lot of uncertainty - especially when it comes to financial markets. So, what if I asked you, do you think the US stock market (as measured by the S&P 500) went up or down after the world’s most recent geopolitical events? Think WWII, Iraq’s Invasion of Kuwait, the Cuban Missile Crisis - these types of events.

If you said that the market not only rebounded but actually went up, then you’d be correct. In fact, after the Iraq invasion, the Tet Offensive, and the North Korean Invasion, the US stock market was up by at least 10% twelve months later. It was even +4% 12 months after the attack on Pearl Harbor!

The only exception to this rule is the events of 9/11. A year later the market was down by roughly 17%, but this was partially due to other factors such as the burst of the tech bubble. I am by no means trying to downplay current events, what I am saying is that there is hope for what may come in the future.

War and the Economy

You’re probably wondering why this growth occurs? Well, in my opinion, there are two main reasons behind it.

The first reason is that the “market” is a reflection of businesses, thus more influenced by micro events (products, services, competitive advantage, etc). People often assume that the market reflects politics and macro effects. These factors may influence the market, but ultimately the market represents businesses profits.

A conflict in one country won’t necessarily affect the businesses that derive their revenues and profits in other countries. This is because people still need to buy food, use their phones, buy computers, and clothe themselves.  Without sounding insincere for the human side of war, businesses and the world continue to revolve.

Furthermore, and more directly, wars are stimulative in nature. When a country goes to war, the government needs to spend (and spend big) to fund the conflict. The spending could be on defense, manufacturing, increased cyber software, or other areas that are critical at the time. This results in a massive injection of funds into the economy.

Take WWII for example. In today’s dollars, WWII cost the US $4.1 trillion [2]. This equates to about 19.6% of our GDP in 2020. Just to put this in perspective, let's compare this to the recent US CARES Act. To help everyday Americans during the onset of the Covid-19 Pandemic, the government passed the CARES Act which saw $2 trillion injected into the economy[3]. This is no small amount, but it’s half the amount spent during WWII.  The point here is that this money finds its way into businesses, which is then reflected in the markets.

Don't Mess with the US

This military spending can also shed light on speculations about a possible WWIII.  Well, in my opinion, this would be a tragic miscalculation for other countries.   In 2020, the US spent roughly 4% of its GDP on its military. This equates to roughly $766.58 billion [4].

The phenomenon has been taking place for the past 20 years of data I looked at: 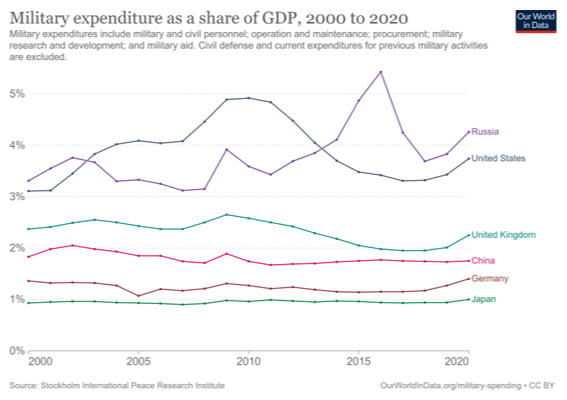 So what does all this mean for you? It means that these macro events might not have the long term effects on your finances that you imagined. Or, in other words… 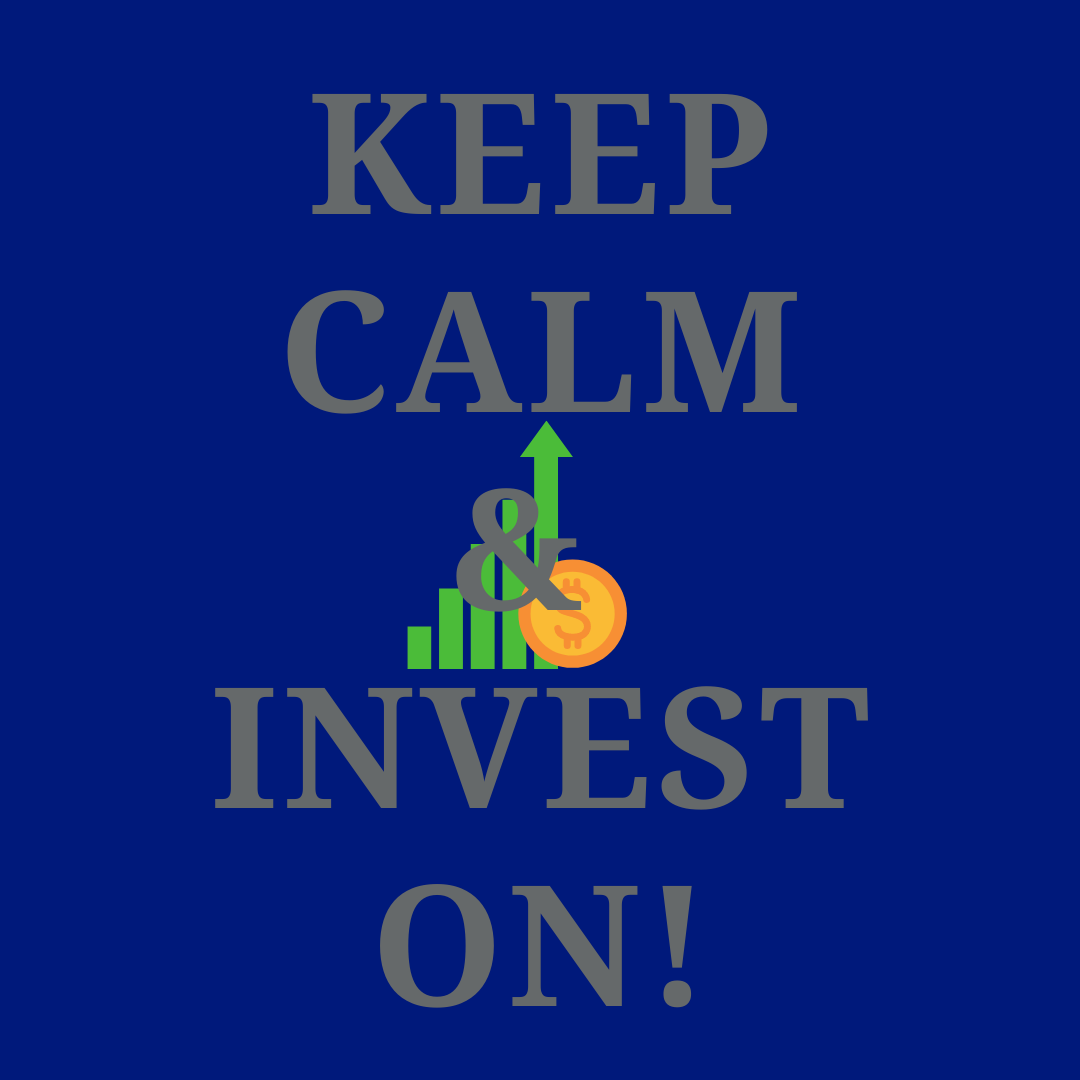 What I’m saying here is don’t do anything. Don’t overreact or let your emotions cloud your judgement. If you’re working to build up your emergency fund, keep doing so. If you’re investing at present, stay the course. Provided that you invest in robust businesses with good cash flow. If you have a healthy level of excess cash flow, this could be a good time to put this money to work for you. Especially given the inflation rate of 7.5%[5].

So take a deep breath, spare a thought and some money if you can to help those abroad, and maintain a disciplined focus on your long term financial plans.

If you need some extra peace of mind or another soothing financial voice, we are here to help!

Note: Corrected version.  A previous version prior to 3/15/2022 listed the drawdown to the Tet Offensive at 6% vs. the correct -6%.  This also skewed the average drawdown percentage from -10.3% to the corrected -12.3%.  Data has since been corrected and prior data should be disregarded.