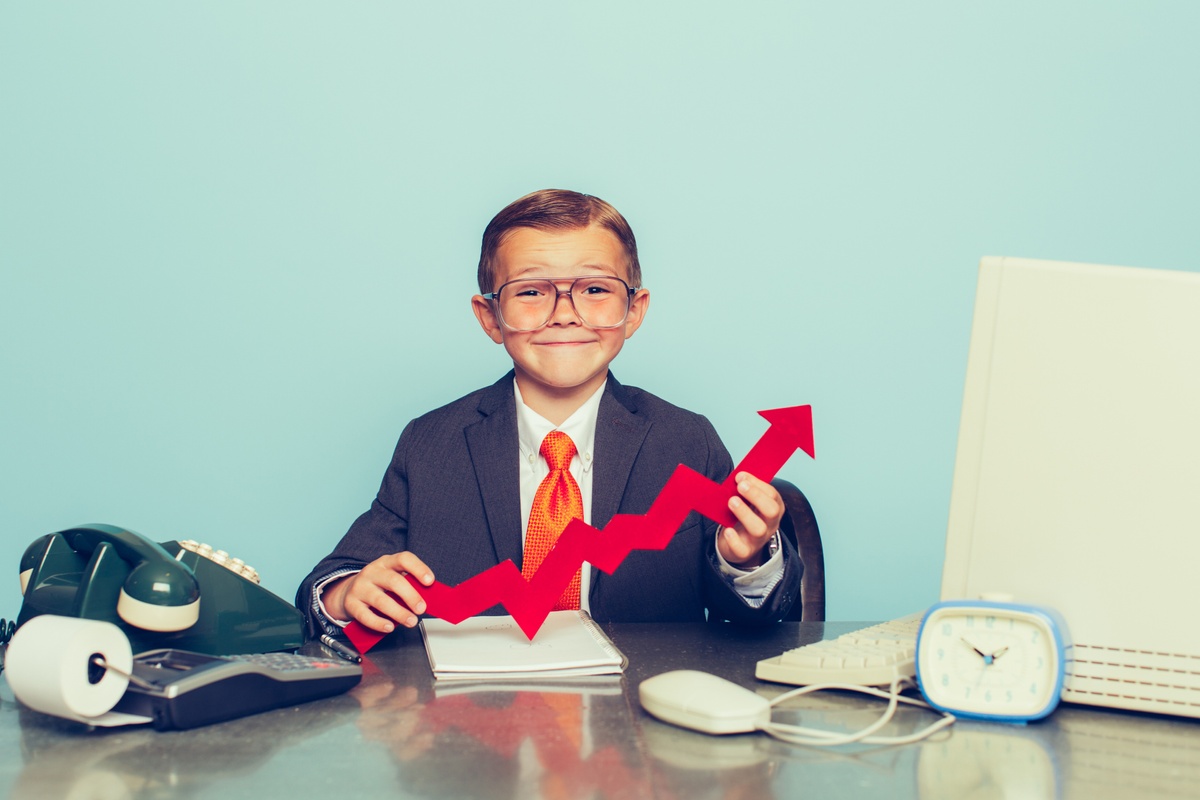 ﻿I didn’t come from money.

Actually, the opposite is true. Before I was 10, my family had fallen apart, my father had lost his business, and our home was repossessed by the bank.  At the time, my brother and I didn’t realize what was taking place, we just thought it was cool to have a green pool with tadpoles living in it! What we didn’t realize is that we’d basically lost everything.

Luckily, my grandparents were able to buy my mom, my sister, my brother, and I a house, as we tried to pick up the pieces. Little did I know, this was the first step on my journey to where I am today.

A few years down the line, I found myself enjoying Heathcliff cartoons like any other kid. That was until my grandfather came to my home. Much to my dismay, he would change my cartoons to CNBC, and together we would watch the performance of his investments and the market as a whole. Not quite the same level of entertainment provided by an orange talking cartoon cat, but to me, it didn’t make a difference - I was captivated by the numbers and caught my grandfather's passion for finance.

I was so excited in fact, that my mom and grandmother convinced him to help me to buy my first shares at the age of 10.

You see, my grandfather was a self-made man, who grew up during the Great Depression. Like me, he understood what it meant to have nothing. Unlike me, however, he understood the true meaning of wealth. He’d seen the trap my parents had fallen into and took it upon himself to give me the financial knowledge I needed to avoid the same pitfalls.

So, there I was, a 10 year old with an investment portfolio - every kid’s dream right?

I had 5 shares of Goodyear Tire, and 5 shares of Pepsi. Before I knew it, my Pepsi shares had doubled, split, and spun out Yum Brands (if you ever wondered why Taco Bell, KFC, and Pizza Hut only sell Pepsi products, well there's your answer!).  Suddenly, I’d made $300 just by watching a company on TV.

I was hooked! By 14, I’d read my first book about Warren Buffett and was embarking on the path that would dictate the rest of my life - a path that was guided by my own compass.

Fast forward a few years and one massive growth spurt later, and I was a 6 ft 2 in, 275-pound Jewish kid, graduating from a Catholic high school with a full scholarship to play college football. This would be the door that football (and my size) would open for me. I studied finance, all while putting my body on the line week in, week out. Until I couldn’t anymore.

After a serious back injury, my football career came to a close as another door opened for me - my financial career. I landed my first job at a Big Four accounting firm.  While this wasn’t my “dream job,” I knew it was a great opportunity. After a pit stop at another institution, I landed a job at one of the largest global investment firms and got to work. Post making a great name for myself, and becoming a CFA Charterholder, I finally landed that role I had been striving for.  After a few years of making numerous investments for faceless clients, I found myself unsatisfied.

I’d dreamed about a career in finance since I was 10 years old (yes you read that right), and while I loved my team, I wasn’t fulfilled.  Who was I helping? All I do is sit in an office all day and stare at 3 screens crunching numbers.  How can I change the system, while being part of it?

So, I did the financial version of ‘soul searching’ and moved to a smaller, boutique firm with the aim of playing a more hands-on role with people. I found myself more fulfilled.

Still, I realized there was always someone else’s interests at play in this industry; another person’s goals to be met. These companies, who I have the utmost respect for, were serving two masters - their clients and themselves. Which is just business right? Well yes, and it’s great... if you’re a business.

Then something clicked. How can they truly serve their clients, whilst keeping their own objectives in sight?

I began to reflect on why I got into this industry in the first place and understood my passion was to build knowledge and share it in the same way my grandfather did for me. To use the skills I’d developed to lift others up, just as he had done for me. There’s no shortage of people in need, in fact, it’s alarming just how many people are in financial trouble.

40% of Americans can’t afford a one-off $400 emergency expense1. How can this be? We live in America, one of the wealthiest countries on earth2. It’s even more alarming to hear that just 9% of America’s population are millionaires. A stat that hasn’t moved much on real terms in 20+ years!3.

So, the country is wealthy, but its people aren’t? Why?

In my opinion, it’s because like every human that has ever gone before us, we fear the unknown. Our finances often suffer the same fate as that weird undersized non-prototypical athlete. As soon as it starts to get a little complex - we turn away and pay attention to something else instead.

Throughout my life, I came across two types of people. Those who took an active interest in their finances and tried to carve a future for themselves and their families (few and far between, unfortunately). The people who, when they realized they didn’t get the prototypical athlete, buckled down and researched until they realized this person has many intangible skills to bring to the team.

Then some who choose to simply walk the path set for them by society; get a job, pay your taxes, get a house you can’t afford, retire eventually if you’re lucky. Those who draft Ryan Leaf over Peyton Manning, Sam Bowie over Michel Jordan, or 198 others before Tom Brady.

What’s the difference between these two people? Knowledge. Or, in the absence of the knowledge, the courage to learn what it is they don’t know and forge ahead when society tells them they will be an outcast if they do.

My grandfather, Julius, passed on to me his financial knowledge and laid a foundation that I was able to build upon. I wanted to do the same for others, and so in his honor, Julius Wealth Advisors was born.

I founded this company to empower people with the knowledge they need to take control of their finances, and in turn, take back control of their lives. I founded this company to tell people what they need to hear, not what they want to hear, so they can make the right choices to better their future. To find their financial freedom.

We grow up being sold on the idea that to be rich is to have all the material possessions in the world. When we’re young, we don’t know how much these things cost, or how much people earn - we just see things that look expensive, or that we’re told are valuable and make the connection.

So, we scrimp and we save, making sacrifices, taking out loans and accumulating debt until we buy that thing we want that makes us feel rich, even though we can’t afford it. Buy this car, buy these designer clothes, buy this house, and you’ll be rich!

This is all fake though. This is a material life, made up of material possessions that can disappear as quickly as they arrive in our lives. People chase these fake goals, get all this stuff, and when it all gets taken away, they’re in exactly the same place where they started. So, the cycle begins anew.

Living a life of richness is a life without fulfilment.

Anyone can be rich for a day, but wouldn’t you rather be wealthy for a lifetime? Then, set up your next generation for their definition of success, as Julius did for me?

A life of wealth is a life of fulfilment. A life of chasing your passions, and taking your own path.

I’ve spent my life going against the grain.

At 10, I was watching Wall Street, instead of watching cartoons.

At High school, I was a Jewish kid in a Catholic high school.

As an adult, I’ve built wealth instead of chasing riches.

I’ve lived a life of wealth. A life that has allowed me to pursue my passions and to enjoy the little things. Life is short. Too short to chase someone else’s dream. Chase your dreams!

Your Future can be Yours

If I handed you $1 million today to pursue anything you wanted to do, what would you do with it?

I’m willing to bet that sum it’s something different to your current day job.

I want to show you how you too can live a life of wealth, and stop chasing a life of empty richness.

Julius Wealth Advisors was set up to do exactly as the name suggests. To empower our clients with the knowledge they need to take control of their finances, and done so with the integrity of keeping their interests at heart.

We’ve all made the same excuses - “Once I get this job, I’ll earn enough”, “Once I get these things out of the way, I can do this”, “If only I had the money and won the lottery”, “If I only took the time to understand my finances.”

Aren’t you tired of living an unfulfilled life?

At the end of the day, you don’t know what you don’t know. I know three things: Food, Football, and Finance, and I want to share my financial knowledge with you. Perhaps the other things as well later down the line - if you’re interested.

So, if you’re ready to take control of your finances, and find a pathway to the things in life that truly fulfill you, I believe you’ve come to the right place.

Welcome to Julius Wealth Advisors. We’ve been here waiting for you since those first 5 shares of Goodyear Tire and Pepsi at the age of 10.  We are here to help!